THE STATE OF MARYLAND

THE STATE OF MARYLAND

Is Marital Settlement Agreement the one last Hail Mary?

The best part about the Maryland Marital Settlement Agreement is that it may be drawn before or even after you file for a divorce, and even when you and your spouse still live together.

When do you need a Marital Settlement Agreement?

Unfortunately, most people filing the marital settlement agreement eventually file for a divorce. And, having the Marital Settlement Agreement in Maryland will simplify your divorce proceedings and pleadings making the process clear. With the agreement, it is clear that you have, before the court, an uncontested divorce.

You need a marital settlement agreement to provide for the future governance of your relationship. The agreement will also offer the court evidence of the day of your separation. So, this agreement clears doubts about the details of the coming to an end of your marital relationship. It is preferable to have the agreement in writing.

When don’t you require a Marital Settlement Agreement?

In case you don’t have any marital property, joint debts, or children, then, you do not need a marital separation agreement for you to get a no-fault divorce.

Initially, you do not have to file the agreement in a Maryland court for it to be effective. But, in the typical separation agreement or the stipulation of the settlement resolving a divorce, it should state whether or not - the agreement will survive the judgement of a divorce as a separate contract, or if it should be merged/ incorporated in the judgement of the divorce, allowing for a modification similar to a court order.

When it does not matter – if it doesn’t matter, your decision will not affect custody and visitation as the issues can be modified until your child reaches the age of 18. This decision doesn’t affect the distribution of property as well.

When it matters significantly – three things are addressed:

Child Support – if the agreement on the divorce merges into the judgment, the court modifies the support upward or downward if a change in circumstance warrants modification. But, if the agreement survives the court’s judgment, the standard upward modification in an unforeseen/ unanticipated change of circumstances will warrant an increase in support. Unfortunately, a request for a downward modification in support is harder to prove.

Right to Sue – The other party can still sue under contract law to enforce the contractual obligation or to obtain a money judgment for the owed amount and to collect it. But, this only applies if the agreement survives the process as a separate contract, even if the court modifies the judgment.

For How Long Are You Bound by the Marital Settlement Agreement?

The separation agreement is a legal document that binds you through years. It will determine your obligations, rights, and responsibilities from your marriage. If you and your spouse consent to any changes, you can amend the agreement.

Understanding the difference between contested and uncontested divorces

The contested divorces are the divorces in which the respondents dispute the issues with the case including the divorce, property division, alimony, and child custody, among others.

On the other hand, uncontested divorces, which can be consent or default divorces are the ones which all parties agree on all the major issues, and the respondent fails to appear to contest the divorce or issues in it respectively.

Note that, legal separation through the Marital Separation Agreement in Maryland renders your divorce an uncontested divorce.

How should you decide?

We cannot decide for you but keep in mind that some cases will take years in court others won’t last a day!

Fill out above form to get a custom marital separation agreement for you.

Whether you live in Baltimore, Columbia, Germantown, Silver Spring, Waldorf, Ellicott City, Glen Burnie, Frederick, Gaithersburg, Rockville or any other city of Maryland, you can use our legal forms easily. 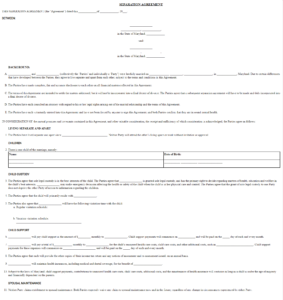 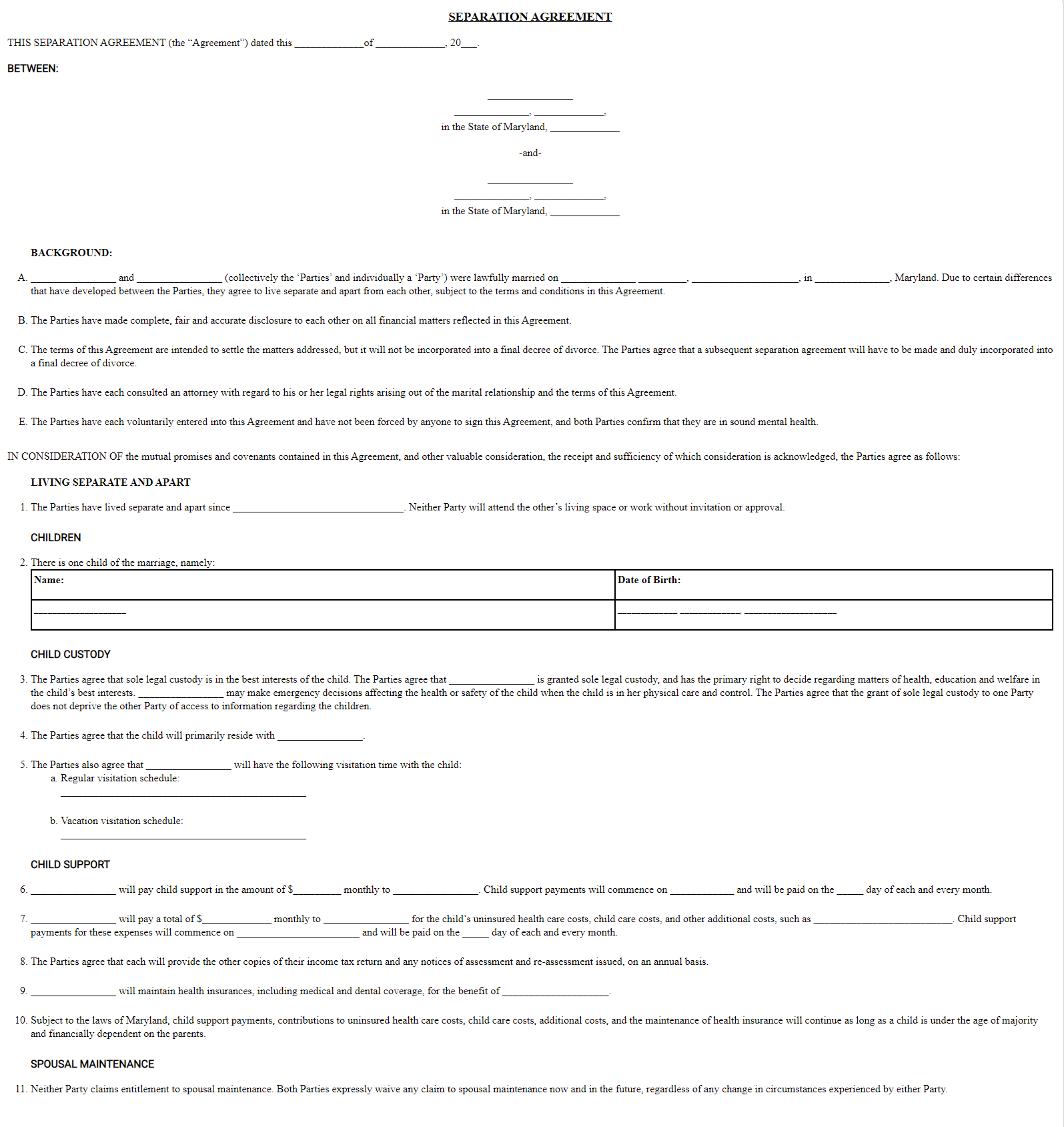