THE STATE OF MINNESOTA

THE STATE OF MINNESOTA

Societal expectations, stature, and religious beliefs are the main determinants to the question, ‘Do you want a divorce or a legal separation?’

In the state of Minnesota, there are laws that permit both arrangements. So, what is the big difference between these two?

A divorce is the dissolution of the bonds of your marital union. It involves division of assets and debts, dealing with custody, and parenting time. At the end of the process, the marriage is no more, and you are free to mingle and marry whomever you deem fit. On the other hand, you have legal marital separation which is in most ways similar to divorce save for the fact that you remain bound by the vows and the union or marriage, and you cannot remarry.

Also, the other difference between these two processes is that a divorce ends with the name change, but that isn’t the case with separation. At the end of legal separation proceedings, you have divided property, gone through child custody and support hearings but you are still tied at the hip with your spouse.

Unfortunately, both processes are tedious, unless you have a mutual agreement in the marital separation, and you still want to be two happy adults at the end of the process.

But, because there are no major differences between divorce and Marital Separation Agreement in Minnesota, why should you go through the marital separation process?

Being New to the State of Minnesota

Did you know that you need to be a resident for at least 180 days in the state of Minnesota for you to get a divorce, but, you can get the legal separation papers even if you have been in Minnesota for a day?

So, yes. If you are new to the state and you really want to part and go your different ways, but stay married, or share your marital name, get the Minnesota Marital Separation Agreement.

The legal separation process is also less complicated, and there are no additional fees incurred in the process.

At the heart of most Marital Separation Agreements is religious conflict. Some beliefs forbid divorce, and legal separation remains the only option.

If conflicted, you should consult your deacon, priest or pastor before getting legal help.

Hanging on the Fence

If you cannot make up your minds as to whether you should divorce or separate, but the idea of living together is impossible, then being legally separated may be your best bet.

With several questions ensuing, a Marital Separation Agreement in Minnesota will help protect your money and kids especially when you have serious concerns about your spouse misusing your money and assets.

The separation may be the smartest move also as it determines the valuation date and it protects your inherited property too.

Is Divorce Better Than Separation in Minnesota?

These two processes are lengthy and in most cases, when you are considering leaving your spouse, divorce is recommended. But then, this is entirely personal especially with kids involved. Both cases will address child custody and support, the division of property, alimony, health insurance, and the division of real property.

Whether you live in Minneapolis, St. Paul, Rochester, Duluth, Bloomington, Brooklyn Park, Plymouth, Maple Grove, Woodbury, St. Cloud or any other city of Minnesota, you can use our legal forms easily. 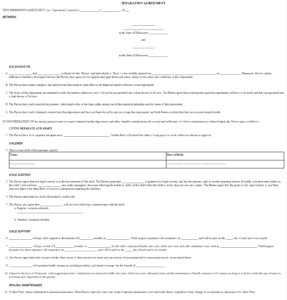 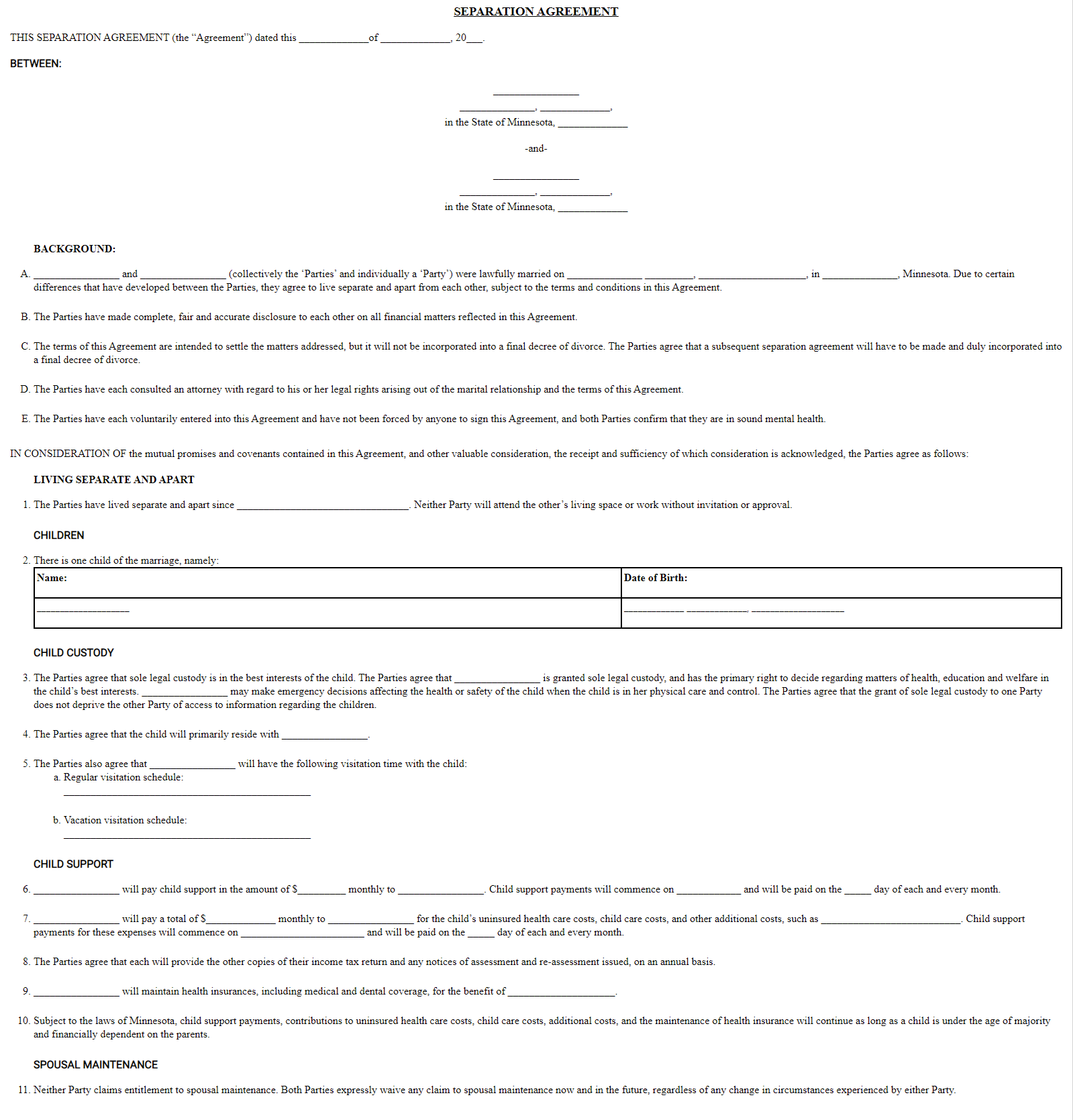