Some businesses offer customers services that are inherently risky, and individuals sometimes host activities or events that may likewise have innate dangers. In these circumstances, it’s essential for organizations and individuals to protect their interests and assets in the event of an accident.

In Illinois, one way to protect yourself from liability is through a release form, which is also known as a liability waiver. These legally binding agreements involve the release of certain rights on behalf of the signing party. In most cases, the signee waives the right to file a lawsuit against the other party in the event of damage or injury.

Liability waivers allow entities or people who offer potentially dangerous services to limit their exposure to negligence claims. In Illinois, these agreements typically hold up in court as legally valid as long as there is no evidence of fraud or reckless behavior.

In the state of Illinois, liability waivers allow businesses to limit their exposure to claims of negligence. Typically, if there is no evidence of fraud or purposefully reckless behavior, these agreements are legally valid.

Who Is Party to a Liability Waiver?

Liability waivers generally involve at least two parties. The person who signs the waiver and releases future legal recourse for any damages is referred to as the “releasor” while the business or individual who provides the service is the “releasee.”

In this example, the rock-climbing company would be released from liability for injuries a customer suffers while using the climbing wall.

In the state of Illinois, release forms are often used to shield companies from possible future legal action. One of the legal requirements to verify that a liability waiver is enforceable is the use of clear, concise and explicit language.

If a release form contains confusing or vague terms, it may not protect the releasee from future legal claims. Waivers that are overly broad are difficult to rely on in a legal setting. That’s why it’s critical for business owners and operators to draft enforceable and clear release forms.

With the help of Forms.legal, you can draft a customized, legally valid release form that meets your unique needs.

Liability waivers can be used in a wide range of circumstances and for a variety of purposes. Popular types of release forms in Illinois include:

This type of document is intended to protect business entities from potential legal claims that may stem from injuries caused by engaging in risky activities. Examples of individuals and organizations that may use activity release forms include:

Any company that offers potentially dangerous experiences should have enforceable waivers and release forms to protect their interests.

This type of waiver can be tailored to protect against a broad range of possible civil lawsuits. A general release of claims may be used by an individual or business, and the specific terms of liability protection are clarified in the waiver’s language.

Property damage waivers protect releasees from civil lawsuits that may arise from personal property damage. Many types of Illinois businesses rely on property damage releases, including those that provide in-home services like plumbing companies and remodelers as well as those with retail storefronts, such as dry cleaners and computer repair shops.

Property damage waivers help ensure that a business will not face legal action from unforeseeable damage to a customer’s property.

Mutual release agreements are typically used to resolve disputes between at least two parties, often those in a professional relationship. These waivers release both parties from certain rights and responsibilities.

Forms.legal is a resource that allows individuals and business operators to easily create liability waivers and release forms that meet Illinois’ regulations.

It’s crucial to note that under Illinois law, liability waivers can only protect individuals and businesses against ordinary negligence. Release forms will not shield individuals or organizations from intentionally wrongful acts, recklessness or gross negligence.

Whether you’re based in Carbondale, Champaign, Chicago, Peoria, Springfield or anywhere in between, Illinois residents and businesses can rely on Forms.legal to draft clear, legally binding documentation. 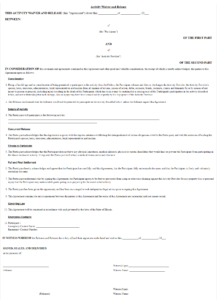 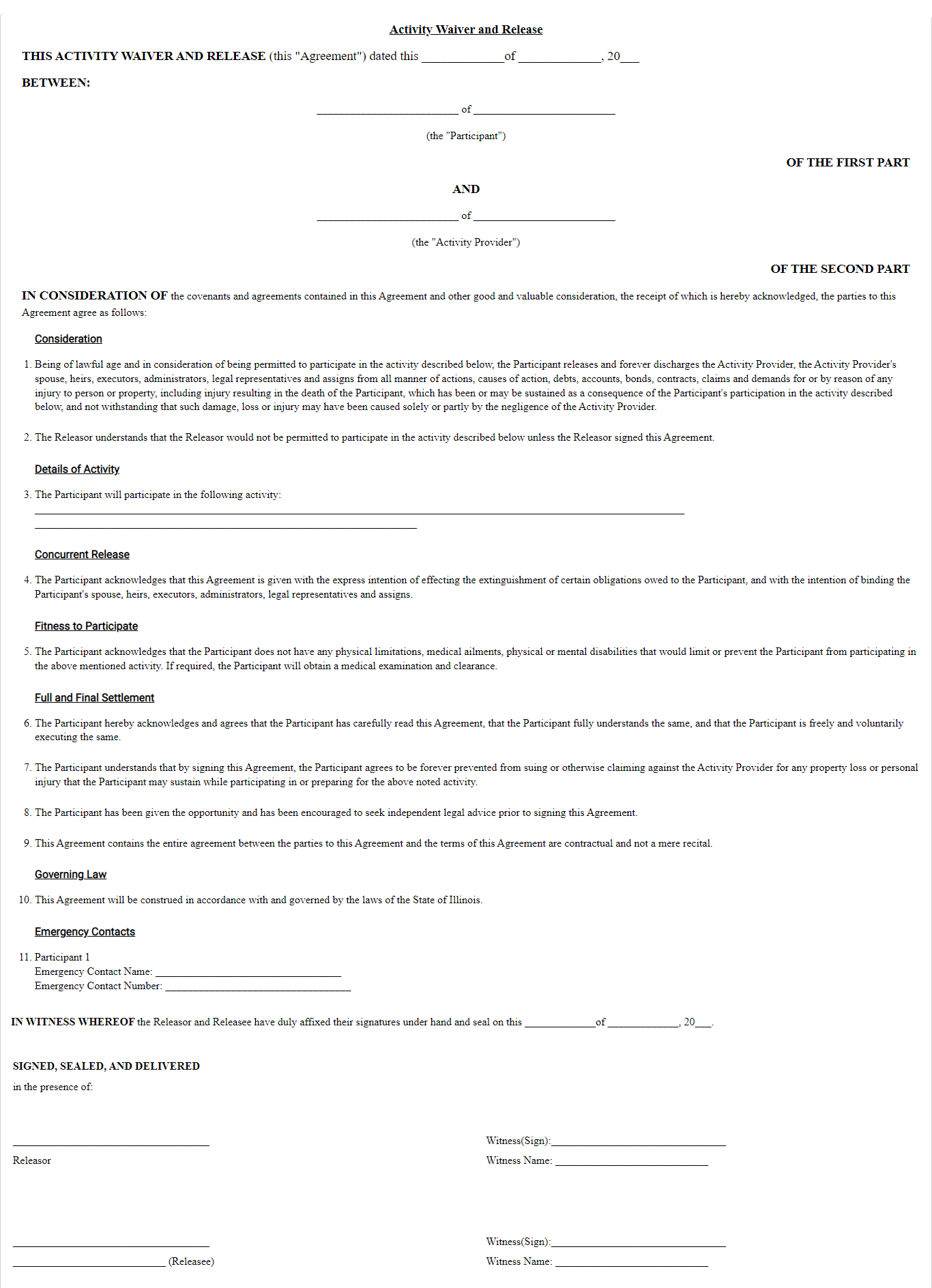