Release forms and liability waivers are common in many professional, recreational and sporting contexts. Typically, these documents are intended to limit the legal and financial exposure of business owners and operators from customers who suffer injuries or other damages while engaging in a service with inherent risk.

When someone signs a liability waiver in Pennsylvania, they are forgoing their right to seek legal recourse for injuries or property damage caused by general negligence. Each state has different requirements regarding liability waivers, which may also be referred to as release forms.

In Pennsylvania, liability waivers are generally legally valid if they contain unambiguous language regarding the innate risks of the service or activity in question, and clearly state the legal protections sought for the business or individual who presents the form.

Who is Party to a Pennsylvania Liability Waiver?

Most release forms involve at least two separate parties. The person or business protected by a liability waiver is the “releasee.” The person who signs the waiver and forfeits future legal recourse is the “releasor.”

For example, a gymnasium may ask its clients to sign liability waivers to shield itself from legal action in the event that customers harm themselves using workout equipment. In this situation, the gym’s customers are releasors and the gymnasium is the releasee.

Liability release forms can be used in many different contexts to protect releasees from possible legal action.

For example, suppose that a rock climbing company requires customers to sign a waiver before climbing. If a customer is injured as the result of an accident, the company would likely be protected against a personal injury lawsuit. This allows business entities to operate without the fear of costly and time-consuming legal proceedings.

In Pennsylvania, liability waivers can also be requested of minors participating in certain activities. However, when a minor is involved the release form must be signed by both the parent and the child.

There are several different categories of liability release forms. Common types of release forms used in Pennsylvania include:

When most people think of liability waivers, they think of activity release forms. These documents are usually intended to protect businesses against legal claims brought by a customer engaged in a risky activity.

Many Pennsylvania businesses rely on this type of release form. Some common examples include:

This type of release form ensures that businesses are covered in the event of a customer injury or accident that is not the result of intentional recklessness or gross negligence.

These waivers are written to protect individuals or companies against legal claims that may arise from property damage relative to their provided services.

Some typical Pennsylvania businesses that utilize damage to property releases include:

This type of liability waiver is most often used to settle potential professional disputes between multiple parties. When two or more individuals have a professional relationship, they may find it mutually beneficial to waive certain legal rights and relieve each other of the possibility for future legal action.

Personal injury release forms protect releasees from tort lawsuits resulting from injury-causing accidents. Many businesses use this type of waiver to ensure that they are shielded against liability from accidents that happen on their property. For instance, an ice-skating rink may require customers to sign a personal injury release before taking to the ice.

Some companies that focus on transportation or include transit in their services may have customers sign motor vehicle release forms. These waivers protect companies from damages that may stem from injuries suffered in a crash. A limousine service, for example, may require passengers sign a liability waiver to safeguard itself in the event that passengers sustain injuries in a collision caused by another driver.

It is vital to use legally enforceable release forms to protect your interests and assets against potential legal claims. With the templates on Forms.legal, you can easily draft legally binding waivers for use in the state of Pennsylvania.

Please note that liability waivers and release forms do not defend individuals or businesses against deliberately harmful acts, recklessness or gross negligence.

From Pittsburgh to Harrisburg, and Allentown to Philadelphia, Pennsylvania residents and businesses can depend on Forms.legal to create easy-to-understand, legally valid release forms and other documentation. 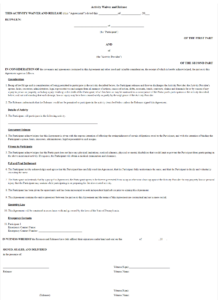 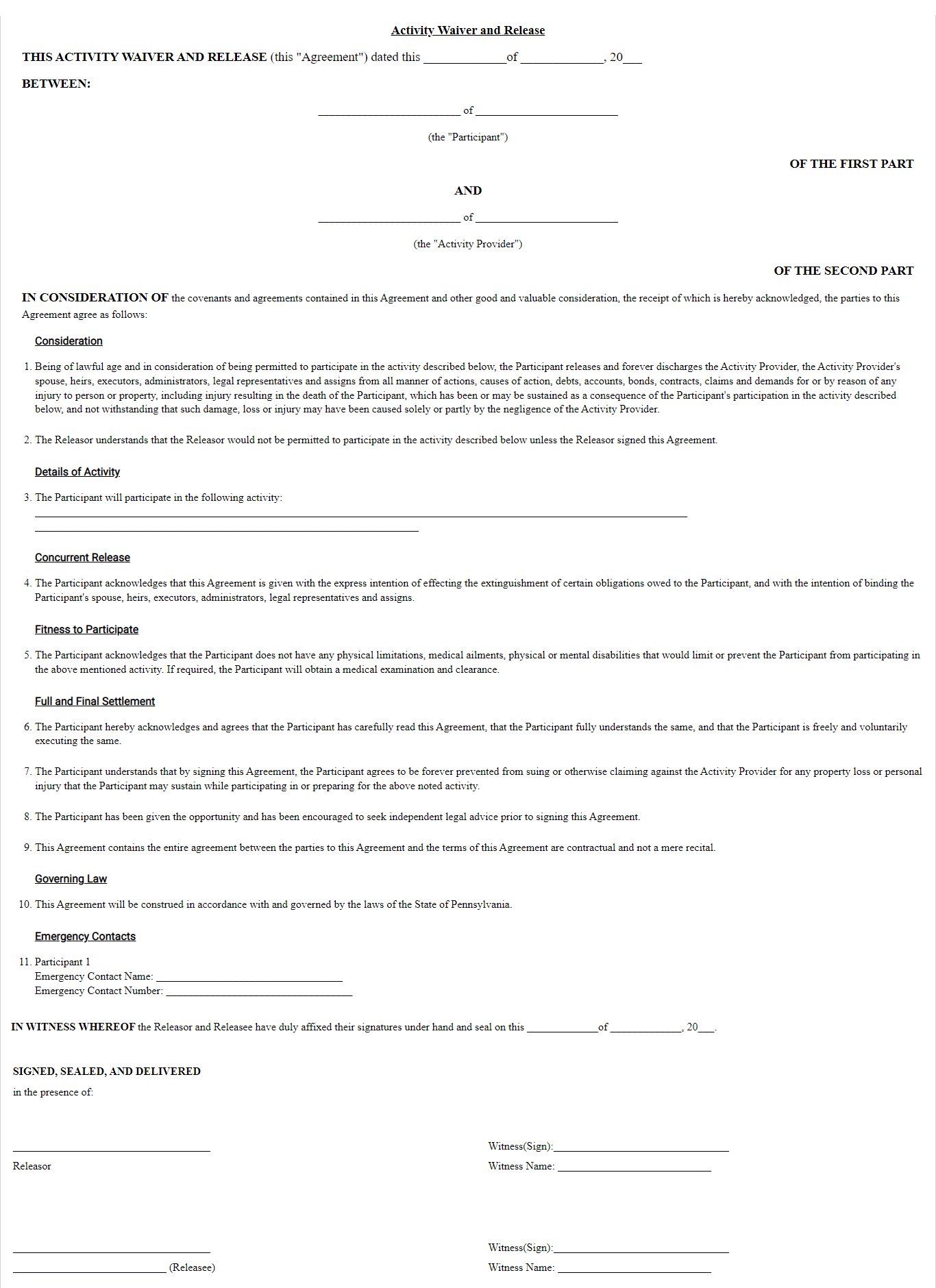