Release forms offer liability protection to both individuals and organizations if unforeseen events occur that cause injuries or other damages. Laws regarding these contracts vary by state, but New York liability waivers are particularly complex and difficult to navigate without a resource like Forms.legal on your side.

Liability waivers are meant to absolve an entity of legal liability in the event of an injury or property damage. When they are crafted in accordance with relevant laws, New York release forms are binding contracts that can protect an individual’s or organization’s finances and other personal assets.

New York liability waivers include at least two parties. The signer of the document — known as the "releasor" — is the individual acknowledging potential risks and relinquishing the right to sue if they suffer harm due to ordinary negligence. The entity requiring the signature — the “releasee” — seeks to avoid legal liability by clarifying potential dangers.

Release forms are not limited to business-client relationships. Releasees may cover a range of individuals and entities by including language such as, “This document releases the organizers, sponsors, employees, and…”

Regardless of whether there are more than two parties to a liability waiver, the release form must meet certain requirements to be enforceable in New York:

Essentially, the releasor must know the exact rights they’re signing away. Any inherent risks involved in the service or activity must be specifically stated, and waiver language must be easy to understand.

Liability waivers often use similar language, but they are not one-size-fits-all. In addition to different states having varying laws, there are also many uses for release forms. The following list is not exhaustive, but it does showcase some of the broad situations covered by release forms in New York.

Most individuals who waive their rights will do so on an activity waiver and release form. In most cases, these contracts are required by service providers that offer inherently dangerous activities. These may include:

No one expects to be harmed during such activities, but accidents are far from unheard of. Additionally, private citizens may benefit from requiring New York liability waivers if they allow someone to use their property for specific activities (e.g., hunting, fishing, boating, etc.).

Physical injuries aren't the only damages a person can experience. This is typically the thinking behind mutual releases.

For instance, business partners may want to avoid lawsuits between themselves if conflicts arise. A mutual release has both parties waive certain rights to provide each with protections.

A New York liability waiver that focuses on physical harm is a personal injury release.

Personal injury waivers must be crafted with special care. A release form that protects a company from liability that occurs during the use of its services, for example, may not protect from liability that stems from other accidents that occur on its premises. This is another reason why clear, concise language is crucial to a legally binding waiver.

Property damage waivers cover service providers whose clients bring personal property on-site (such as a dry cleaner or cell-phone repair shop) as well as those who provide in-home services (such as a plumber or electrician). In these cases, damage to property releases protect the service providers against damages related to accidental harm that might occur to the releasor’s personal property.

Not every New York liability waiver requires the signature of the releasor. Sometimes citizens waive certain rights just by buying a product or a ticket for an event. The language on many receipts and tickets states that the purchaser or attendee acknowledges the risks involved and waives their right to pursue legal action if they suffer injuries or other damages.

State law prohibits New York liability waivers from protecting against gross negligence and other actions against the public interest. New York release forms may also be unenforceable in these circumstances:

Forms.legal makes it easy to create legally binding New York liability waivers. Whether you live in Albany, Buffalo, Long Island, New York City, Syracuse or anywhere in between, New York residents and businesses can count on Forms.legal to craft a variety of legal documents. 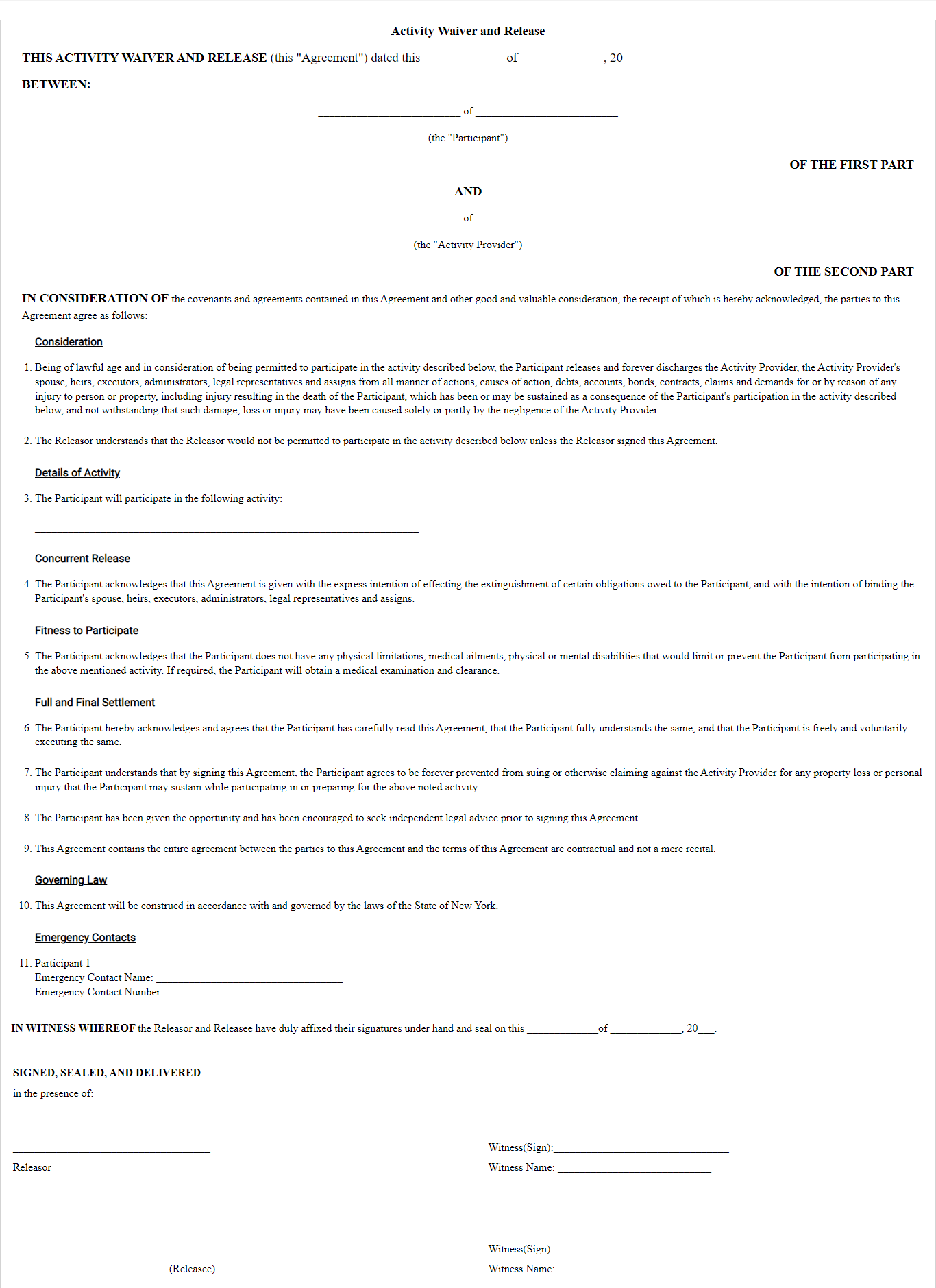